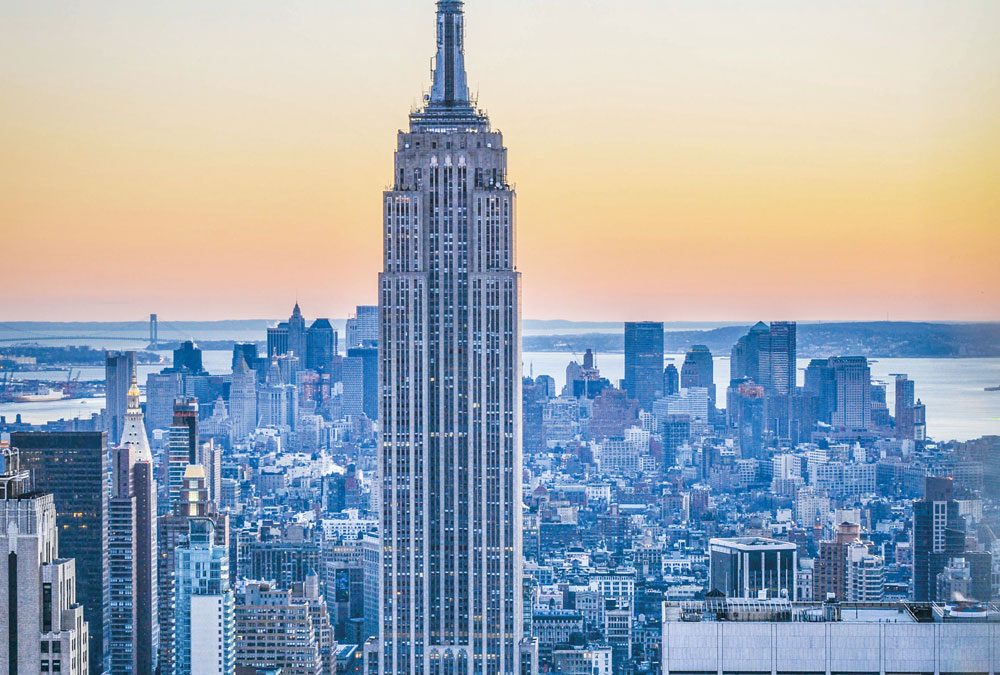 The view from the top

ILD criss-crosses the globe working on the roofs of some of the world’s most famous buildings. While we appreciate all of the roofs we traverse, our fondness and appreciation for certain buildings is deep due to their rich and vibrant history. One such structure is the Empire State Building.

A world-famous landmark, the Empire State Building is a 102-story art deco skyscraper in Midtown Manhattan, New York City. It was designed by Shreve, Lamb & Harmon and was completed in 1931. The building has a roof height of 1,250 feet and stands a total of 1,454 feet tall (that’s including the antenna!).

The site of the Empire State Building was originally part of an early 18th-century farm. It was later purchased by the Astor family, who built the Waldorf–Astoria Hotel on the site in the 1890’s. The hotel remained in operation until the late 1920s, when it was sold to the Bethlehem Engineering Corporation, and then to Empire State Inc. Construction on the building itself started on March 17, 1930 and was completed 14 months later.

Since its opening, the building’s art deco architecture and open-air observation deck has made it a popular tourist attraction, with around 4 million visitors from around the world visiting the building’s 86th and 102nd floor observatories every year, providing unforgettable 360° views of New York City and beyond.

In 2011 the landmark earned LEED-Gold certification. The recognition from the U.S. Green Building Council and its green building verification arm, the Green Building Certification Institute, was an accomplishment for the iconic skyscraper and involved a number of initiatives including window retrofits, upgrades in tenant lighting, optimized HVAC and ventilation operations, and installation of energy management systems to allow tenants to better manage their power use.

The environmental upgrade of the building was a huge undertaking that was predicted to reduce energy use by more than $4.4 million annually and cut carbon emissions by 105,000 metric tons over a 15-year period.

Capitalizing on its towering stature and prominence in the New York City skyline, the Empire State Building marks important anniversaries and events through its illumination of the top 30 stories. In 1964, the top floors were illuminated by white floodlights to mark the beginning of the New York World’s Fair, and in 1976 coloured lighting was first introduced when the tower was lit in red, white and blue in celebration of the American Bicentennial. The tradition continues. The website of the Empire State Building carries their Tower Lighting Calendar that includes: blue and purple in honor of Police Memorial Week in May, red, white and blue in honor of Veterans’ Day, and even, pink in celebration of the 2018 Victoria’s Secret Fashion Show.

The Empire State Building has been featured in more than 250 TV shows and movies. Perhaps the most iconic cinematic representation of the building dates back to 1933 when King Kong brought actress Fay Wray to the top of the skyscraper. When she passed away in 2004, the building’s lights dimmed for 15 minutes in her honor. Many may remember Sleepless in Seattle, in which the Empire State Building played a central role. Our team was asked to perform a trouble shooting test on its observation deck which happened throughout the evening when the building was closed to the public. We experienced seeing New York go to sleep and wake up at dawn. It was amazing to see such a vibrant and robust city quiet into the night from our vantage point. Sometimes our work delivers unexpected gifts.

A trip to New York City isn’t complete without a visit to the Empire State Building. It’s the world’s most famous office building and was designated a historical landmark in 1986. There is 2.8 million square feet of office and retail space in high demand because of the structure’s cultural prestige and proximity to central transit hubs in the city.

We are very proud to have worked with the Empire State Building when they needed our expertise to test several new vegetated roof areas along with trouble shooting tests on other roofs. ILD has a deep respect for buildings that reflect history, culture, community and innovation and we’re honored to play a part in their preservation.